They sat quietly for a few minutes. Close enough to be able to have a whispered conversation, but far enough apart to discourage suspicious glances.

She sniffed softly, obviously struggling to hold back tears. He hated it when she cried.

His posture had changed. No longer relaxed in the warm spring sun, he glanced around quickly to see if there was anyone hiding behind the bushes, waiting to attack him.

“At first they laughed. But when they realized I was serious…”

Her choked sob made him wince. His first instinct was to run away as fast as he could. Then she let out a long sigh and continued.

“…when they realized I was serious Mum started crying and said she was going to make me an appointment to see the doctor. Papa got so angry. I was afraid he was going to yell and punch the wall, but then he just went outside.”

She seemed to calm down somewhat. He knew she was waiting to see what he would do.

“Were you surprised by their reaction?”

“I suppose not.” She sniffed again, but this time her voice was steadier. “I told them you were special. That our relationship was….special. But they didn’t understand.”

She glanced at him then. After a few moments of sitting quietly again she turned to look directly at him. The sun sparkled off of the tufts of grey that were dancing in the soft breeze. He looked frightened. She felt frightened.

“We knew this day would come little one.”

“Yes. I suppose I did know that.” In a sad but stronger voice she asked, “Will I ever see you again?”

“You will. But we cannot meet like this again. It will never be like this again.” he said gently as he stood. “I will be watching you from a distance. Don’t be afraid. I’ll always be close by in case you need me.”

“I’ll miss you so.” She wiped her nose with the sleeve of her sweater, then also stood.

The two secret friends stood there looking at each other for another minute or so, as if trying to imagine the future they may have had without the world interfering.

Then the girl walked slowly back to the path that lead to her street. He scampered across the bench seat and with a leap he scurried up the tree trunk to safety in the canopy of branches above. 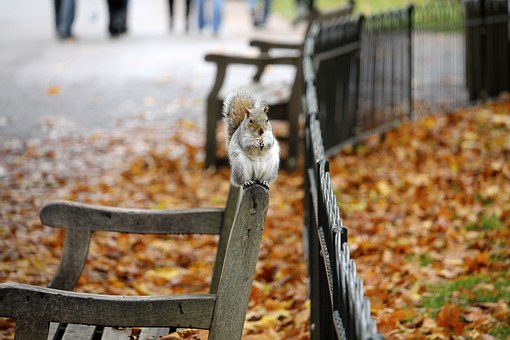 There is only one rule

~An it harm none do what ye will ~ And it really is just that simple.